Daughter of the night sky

I would like to share with you a story. I’ve been writing in my notebooks since a very young age and it became my first, main form of expression. I’ve always wanted to do something more with it, expand beyond pages of the journal. Since I’ve started to draw my own projects, touching magical, fantastical, or surreal realms different kinds of ideas for writings appeared as well. I find fiction writing much more difficult than just journaling, train of thoughts style, but I’m determined to keep learning. I’d love to take you on this journey and I welcome every feedback you can give me.

My recent drawing “Daughters of the night sky” is inspired by the creature from Slavic mythology, half women, half-bird of pray. Some say she is a bird of sorrow and a messenger of death luring her victims with her beautiful voice. The story that came to me is also inspired by Slavic fairy tales, a little dramatic and maybe naive in some ways, yet I’ve always been attracted to them.

Once upon a time, when people believed in many gods and deities and lived beside magical creatures and spirits, there was a girl with the most beautiful and enchanting voice ever heard. Her name was Helena and the tunes she spread told of happiness and could soothe any aching soul. Every night she sat by the fire and waved melodies that had the power to gather and reconcile all the villagers. No one could resist the healing force of her songs

Yet there was something she couldn’t heal – the pain of her broken heart. One winter night she lost the love of her life to the Spirit of the River. Now every time of full moon she goes to the stream and sings for the Spirit in hope that he would return her love back to her.

It was believed that the full moon enhances all desires of the heart, it is the time when the magic is the most powerful. Yet it’s also a very dangerous moment, the hour of spirits and ghosts when creatures from the Underworld come up to the earth in search of prays. One of them is Sirin, neither bird nor a woman, huntress of souls and messenger of death. Her biggest weapon is the voice so compelling that enchants the victims so the only thing they want is to follow her back to the Underworld and never stop listening.

That Night a sad song of Helena attracted one of the Sirins. When she saw a girl jealousy burst in her, for she knew that she could never compete with this power. As a silent huntress, she fell from the sky and pushed the young woman to the river. There was no one to hear the screams for help. When she opened her eyes there was nothing but darkness and moans of distressed souls echoing in the air. The Underworld. Tears filled the girl’s eyes and her aching heart sang of pain, sorrow, and loss. When the God of Death heard the melody he couldn’t resist but follow and when he saw a beautiful woman he immediately fell in love. He tried to talk to her but she wouldn’t stop crying. The fact that she will never feel the touch of the sun on her face ever again was unbearable. Even the Lord of Darkness has a heart so he proposed a deal. He would let her be among her people during the day but every night she would turn into a Sirin, bring lost souls to the Underworld and then sing to him until sunrise. And one day, when she would gather ten thousand souls she will be allowed to see her love. The man brought by the Spirit of the River to the gates of the Underworld. She agreed for there was no other way.

Years went by and the animal instinct began to take control over Helena. Every night she was losing her humanity more and more, spending time hunting with her bird-like sisters and singing for God. She started to forget who she really was, dwelling between two worlds yet belonging to neither. Then came the time when she brought the last promised soul. The god kept the agreement and took her to the one she loved. But the boy didn’t recognize her. There was more bird of prey in her now than a beautiful girl he once knew. Seeing the fear in his eyes broke her heart again. At that moment she knew that the only way to soothe the pain would be to stay as a Sirin forever. God knew it too, she was his since the very moment she entered the gates of Underworld.

Now the darkness is her home, the full moon a pale lover, and her sisters the best companions with whom she sings and hunts. She does not feel pain anymore for she became the true daughter of the night.

This drawing is currently on display at the wonderful Haven Gallery in New York. I am absolutely thrilled and happy to have my artwork there, among so many wonderful artists I admire. If you are interested in purchasing this piece o more information about the show “Of land, sea, and sky” write to info@havengallery.com 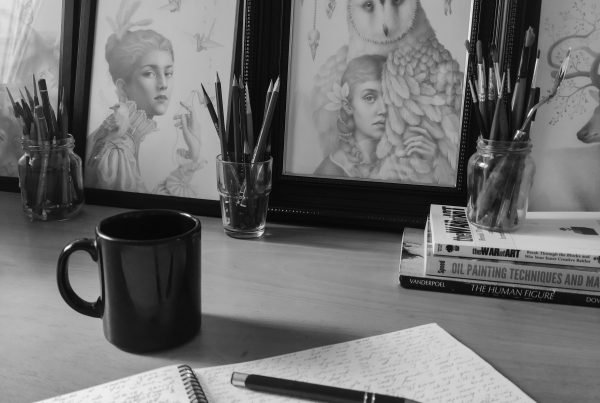 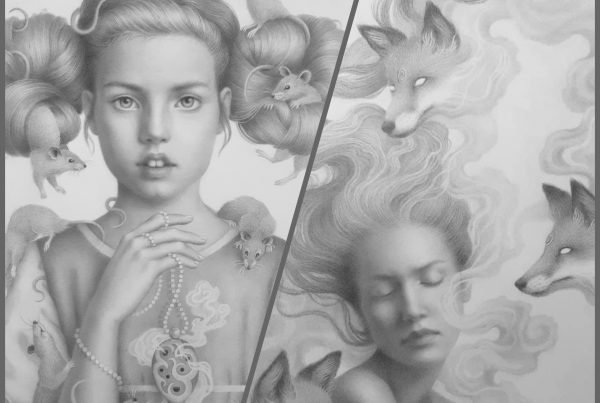 Draw This In Your Style Challenge 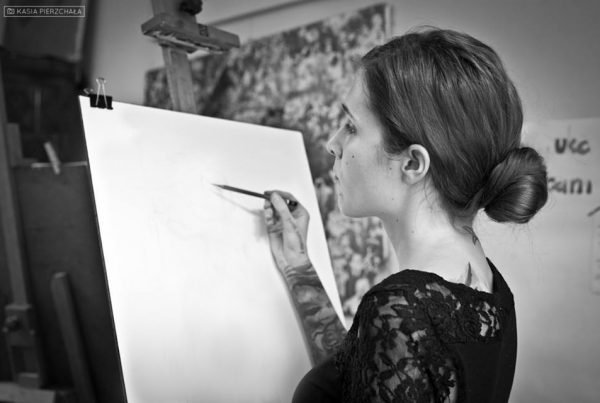 I invite you to take a walk through parts of my world. I hope you will take a spark of magic with you 😉